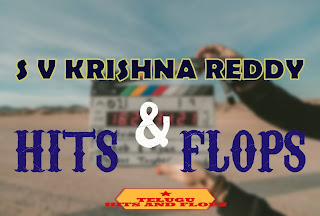 Here is the List of SV Krishna Reddy Telugu Hits and Flops :